Bankruptcy Student Loans – Are They Included? 2022 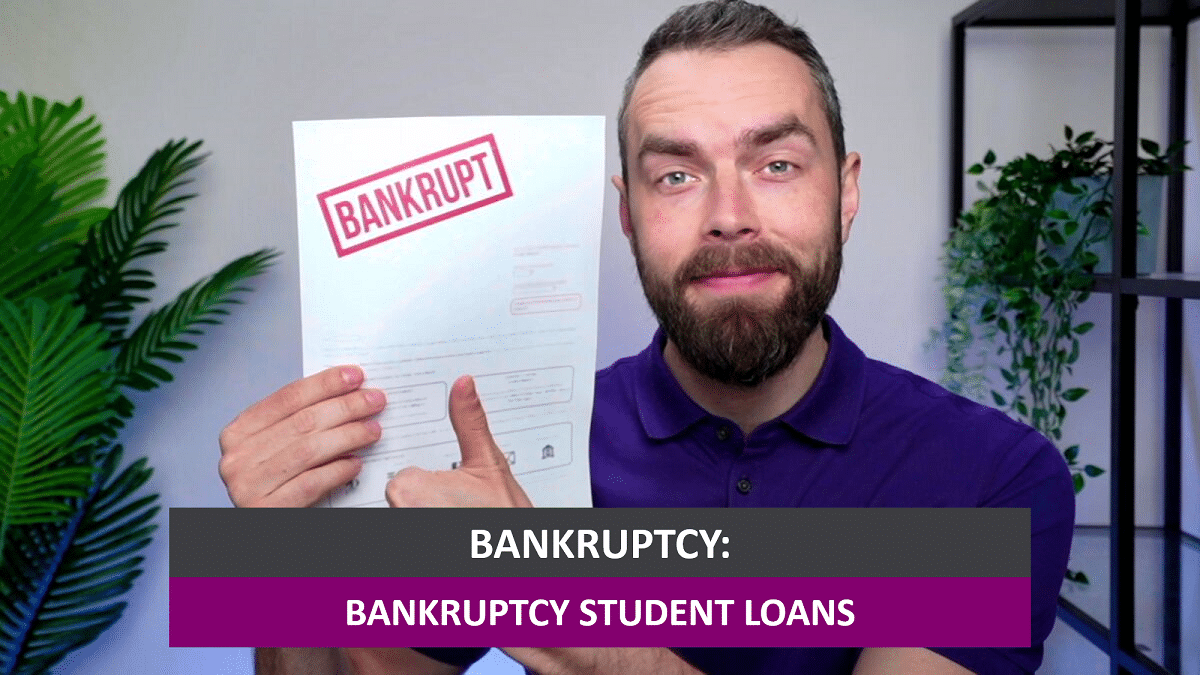 Will bankruptcy wipe your student loan debt? We answer this question and related questions about bankruptcy and debt, right here.

Whether you are thinking about bankruptcy or have already filed for bankruptcy, we address which debts are and are not going to be wiped at the end of the process.

Bankruptcy is an insolvency option and a last resort option for people with significant debts they cannot repay in a reasonable timeframe. Large debts are usually combined with severe financial difficulty.

Although bankruptcy often has negative connotations within society, it can be the right and best decision for some people depending on their debt situation and financial position.

There is a complex process to bankruptcy, starting with an application and securing a bankruptcy order. You must file the application to the Insolvency Office, where the case will be dealt with by an Official Receiver and possibly a trustee.

During bankruptcy, your money and assets are likely to be sold to pay for the bankruptcy process and to repay what you can to existing creditors, including any interest.

There are some situations when you can keep a vehicle or home (maybe for a short period).

Creditors can apply for your bankruptcy too, but this only happens when you have not paid larger debts even when you have the money to do so. It is known as Involuntary Bankruptcy.

After having your bankruptcy accepted, you become an undischarged bankrupt. At this stage of the process, creditors cannot chase you for payments and your bank accounts will be frozen. You’ll also be placed under strict restrictions by your Official Receiver.

Undischarged bankruptcy typically lasts for one year, and then you will be discharged. When you discharge from bankruptcy, you are simultaneously freed from your debts as well. However, not all debts are dischargeable by bankruptcy.

Will student debts be written off at this stage of bankruptcy? We have the answer further below!

Your bankruptcy may include an order to keep paying a monthly payment to some creditors if you have an income. These debt payments can continue even after your bankruptcy is discharged for up to three years.

There are times when you can remain undischarged for longer, up to a maximum of 15 years. For example in cases of serious fraud or reckless financial behaviour.

If your total debts are £30,000 or less and you have no valuable assets, such as a home, you may be better off using a Debt Relief Order (DRO). This is a less serious version of bankruptcy. Just like bankruptcy, your DRO will stop creditors from asking for payment or taking you to the courts for one year before writing off most of your debts.

Or you may benefit from a different solution, such as an Individual Voluntary Arrangement (IVA).

Can you declare bankruptcy on student loan debt?

Even if you have finished your bankruptcy, you’ll still have to repay any student loan debt (and interest) you have with the UK Government. But as this debt is only repaid after you earn a certain amount each tax year, you won’t have to repay if you are unemployed or a low-income earner.

Why are student loans not dischargeable in bankruptcy?

There is no certain answer to why you still have to repay your student loan after you are discharged. But it is arguably because it is a payment from the UK Government – and because you will not have to repay the debt unless you earn above the threshold.

Will a DRO cancel student debt?

With that in mind, you may be wondering if a Debt Relief Order will write off your student loan debt where bankruptcy cannot. Unfortunately, DROs also won’t cancel these debts.

How do you get your student loan forgiven?

Unlike many other countries, the UK will write off student debt after so many years. When your debt is written off depends on when you received the loan, i.e:

For many people with student debt that have not been earning enough to make significant contributions, they are likely to have some of this debt cancelled. For that reason in these cases, making voluntary contributions is not worthwhile.

What debts are not wiped by bankruptcy?

Bankruptcy will not free you from your student debt, and there are other debts that are not covered by bankruptcy. For example, if you have any of the following debts, you’ll still be responsible to repay even after being discharged:

You can apply to the court for the latter two debts on that list to be wiped. You’ll also need to keep making mortgage payments if applicable, as this is a secured debt.

If your bankruptcy includes a joint debt, the creditors can then chase the other individual for all of the money. You could both apply for bankruptcy (if both suitable) and the debt may be written off eventually. However, there is no such thing as joint bankruptcy. You’ll have to apply for your bankruptcy separately and pay the bankruptcy fees each.

If you owe payments on credit you accessed through fraudulent means, these will not be written off within your bankruptcy. You’ll be responsible for paying these creditors after the bankruptcy has been completed. And you may face other court action.

If you want free personal debt advice on any topic from bankruptcy to court proceedings or just help to manage your money, you can always call a debt advice charity.

They will offer private and expert support and guidance in any debt situation, or when taking on your creditors!