Why Would a Creditor Refuse an IVA? Main Reasons 2022 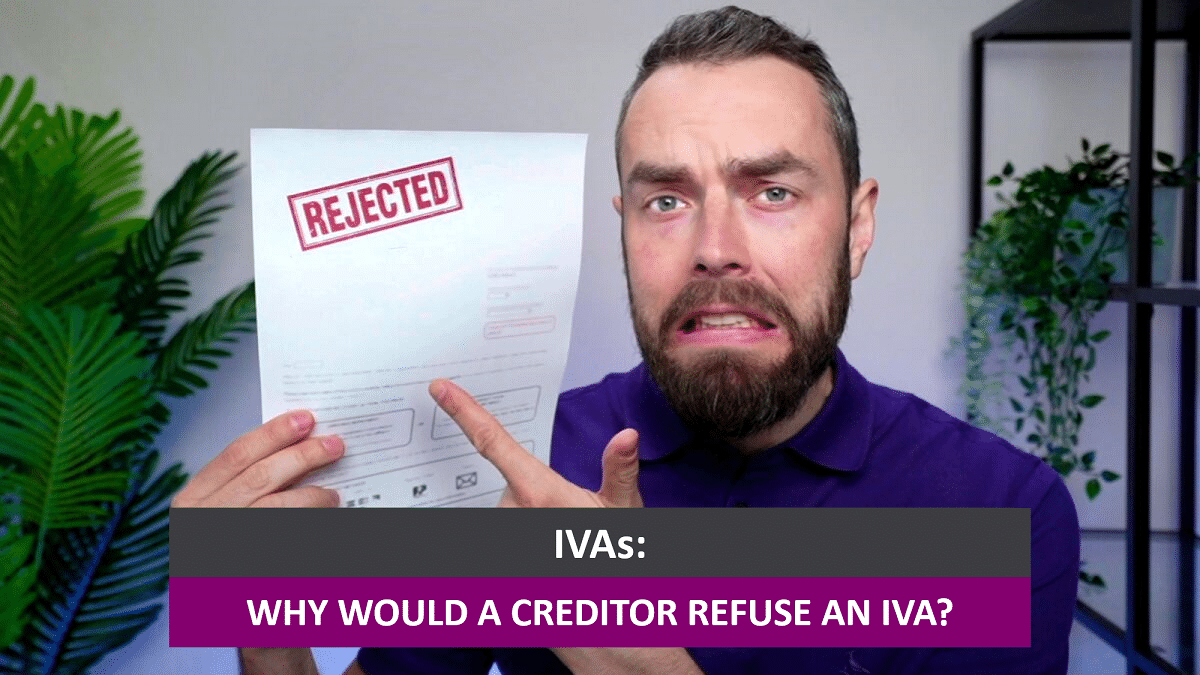 An Individual Voluntary Arrangement (IVA) can do wonders for people who are suffering from crippling debt which they can’t afford to pay back.

That being said, if you’re opting for an IVA, there’s a chance you may have trouble getting your creditors to accept it.

Today, I’ll be looking at why some creditors may decline your IVA proposal, what you can do to prevent this from happening and what options you have if this does end up happening.

Table of Contents show
1 How does the initial IVA Proposal Work?
2 Why was My IVA Rejected by My Creditors?
2.1 You Provided Incorrect or Incomplete Information
2.2 Unrealistic Budget or Payment Plan
2.3 Creditors May Have Had Bad Experiences with You in the Past
2.4 Your Proposal may not be Viable for a Creditor (or Creditors)
3 What Should I Do if My IVA gets Rejected?
3.1 Debt Management Plan (DMP)
3.2 Debt Relief Order (DRO)
3.3 Bankruptcy
4 Conclusion

How does the initial IVA Proposal Work?

When you decide to opt for an IVA, the first thing you will do is look for an insolvency practitioner (IP). If you’re opting for an IVA company, be sure to go for one that is authorised and regulated by the Financial Conduct Authority (FCA).

Once you’ve found one, you and your IP will sit down and draft an IVA proposal.

The IVA proposal will have detailed information about your income, expenditure, total debt and assets. It will also have a complete payment plan that would be put into place if your creditors were to accept your IVA proposal.

Once you’ve drafted your IVA proposal with your insolvency practitioner, they will call a meeting with your creditors and present the proposal to them.

Your creditors will then deliberate over the proposal and either accept or reject it.

In order for your IVA proposal to be approved and your IVA to be put into place, you’re going to need the approval of at least 75% of your creditors.

It’s important to note that the vote of every creditor does not hold the same weightage; It depends on how much money you owe to them.

Why was My IVA Rejected by My Creditors?

There could be a number of different reasons, depending on your circumstances, as to why your IVA was rejected.

Some of these are:

You Provided Incorrect or Incomplete Information

Remember that your creditors are people or entities that have been dealing with you for a while. Hence, they will have some semblance as to what your financial circumstances are like.

When you’re coming to them with an IVA proposal, they will expect you to be thorough as well as truthful.

Thus, if a creditor is aware that you’re hiding something in your IVA proposal or are presenting it as something that it’s not, it’s highly likely that they will reject your proposal.

Your creditors may inquire about it with your IP who will be chairing the IVA meeting of creditors but they are under no obligation to do so.

There’s a chance that they may flat-out reject your proposal if they feel that they’re being lied to.

Thus, it’s important that you be extensive and honest when you’re writing your initial proposal in order to get your IVA approved.

When you’re trying to take care of your debt through an IVA, you’re going to need to be honest about what your payment plan is going to look like.

It should be your best possible attempt to address the unsecured debt you have with your creditors.

Thus, the payment plan that you propose to take care of your debts should be consistent with the income and expenditure you provide in your proposal.

It’s important that you disclose all the debt you have as well as all the income that comes your way each month. Nothing should be omitted, understated or overstated.

For example, if you work overtime regularly and this boosts the amount of income you get, then you should include this information within your proposal.

Similarly, the essential living expenses which you detail in your proposal should also be reasonable.

If you share your household with a partner, then your creditors will expect you to spilt the household costs with them in a reasonable way.

Creditors May Have Had Bad Experiences with You in the Past

If you have acted in an irresponsible way in the past regarding your finances and your creditors are aware of this, there’s a likelihood that they will reject your proposal.

If the debt you are in now occurred due to chronic addiction or irresponsible behaviour such as reckless spending, drinking or drug abuse, then your creditors will need some sort of assertation that you have mended your ways.

If creditors feel that you’re going to continue behaving irresponsibly if your IVA is approved, then, of course, they’re going to reject it.

Your Proposal may not be Viable for a Creditor (or Creditors)

Of course, if a creditor feels that the amount that they’ll be paid back by you will be very low if they enter into an IVA with you, then they’ll reject your offer.

It’s more likely that creditors will be willing to accept your proposal if they feel that there’s no other way you can realistically pay back your debt to them in full.

What Should I Do if My IVA gets Rejected?

When creditors refuse your proposal, they may provide your IP with reasons as to why they rejected it.

They may even propose some changes to your proposal.

You then have a choice to accept their changes or make amends to your proposal in order to make it acceptable for them.

You can choose this path if you’re willing to accept the changes they propose and in this way, your proposal may get accepted.

I highly advise that no matter what your financial circumstances, you should seek debt advice from your IP before you decide to make amends to your proposal for your creditors.

If you’re not willing to accept the changes that your creditors propose, then you can opt to go for some other debt solution to take care of your debt. Depending on your financial circumstances, one debt solution may be a lot better for you than others.

Some examples of other debt solutions are:

A debt management plan is similar to an IVA in that it’s an agreement between you and your creditors that you will make small payments to them monthly and pay your debt back to them over an agreed-upon period of time.

Please note that a DMP is not legally binding like an IVA is.

You can choose to set up a DMP yourself with your creditor(s) or you could also hire a debt management company (or debt charity) to get it set up. Always opt for a company that is authorised and regulated by the Financial Conduct Authority.

You can opt for a DRO if your overall debt amounts to less than £30,000 and you have a spare monthly income of less than £75.

A DRO is much quicker than an IVA as it ends within 12 months. However, in order to qualify for a DRO, you need to have little to no assets to your name. There are also other strict eligibility criteria which you should be aware of.

You could file for bankruptcy and get your debt settled in a relatively shorter amount of time.

Unlike IVAs, your assets are not protected when you declare bankruptcy. They can be seized and sold off.

There are a number of different reasons as to why creditor(s) could reject your proposal.

This is why you should seek debt advice and information from your IP and work with them closely when drafting your proposal.