Selling Debt in the UK – Complete Guide for 2022 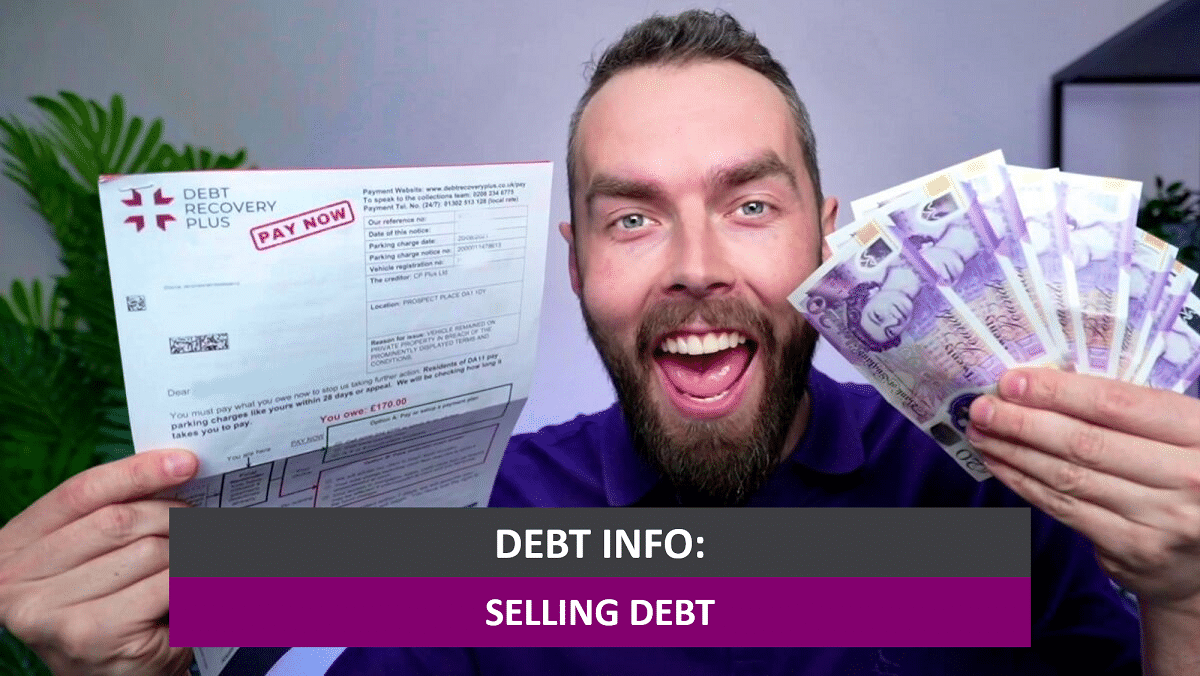 If you’re a debtor who hasn’t been making payments on your loan recently, you might be notified that your creditor has sold your debt to a third party.

If you’re unaware of what this means, keep reading.

I’ve compiled a guide that explains everything you need to know about selling a debt.

Let’s get right into it.

What does it Mean to Sell a Debt?

To put it simply, to sell a debt means that a creditor sells your debt to a third party, which is usually a debt purchaser, for a certain price. Your creditor negotiates a deal with a collection agency or a debt purchaser. If they agree on a specific amount, the creditor sells the debt to the purchaser for that amount, which means that the creditor receives immediate payment and no longer has anything to do with the loan.

The creditor receives an amount that is a percentage of the outstanding debt. The debt purchaser gets the right to retrieve the full amount from a debtor. This also means that if your creditor sells your debt to a third party, you then legally owe debt repayments to the third party and not your original creditor.

Why do Creditors Sell Debts?

As for why most lenders sell debt, it’s a pretty simple answer. Your lender likely specializes in lending money and collecting it, not in chasing you around for your debt or getting you to repay them if you’re bailing on your payments. If you’re someone who isn’t making regular payments, and have shown little to no intention of repaying your debt in the near future, your lender may eventually get frustrated and outsource this task to a debt purchaser or a debt collection agency.

If a lender is incurring a lot of financial loss in getting a debtor to repay them or taking them to court, the creditor may choose to pass on the debt to a collection agency and settle for a small percentage of the total debt amount that the agency pays them in return.

Who Buys Debts & Why?

A debt purchaser or a debt collecting agency buys your debt from your creditor. When the debt amount is large and your creditor sees little to no chance of getting it back themselves, they might contact a debt collector and sell your debt off in exchange for a percentage of the amount they would’ve received if you repaid your debt in full.

Once the loan has been sold, the debt collector has the right to collect the full amount from you. That’s how debts collection agencies and debt purchasers make their profit.

How Does it Affect me When a Lender Sells off Debt?

Technically, a sold debt doesn’t affect you much. Your rights and liabilities remain the same as they were in the original debt. So do the original terms and conditions between you and your lender. The only thing that really changes is the person or agency you have to pay back.

For example, if the original lender wasn’t allowed to add interest to your debt, neither can the debt purchaser.

Should You Pay a Debt Collection Agency?

Here’s the tricky part: a lot of debtors, once they’re contacted by a debt collector, assume that their debt has been sold off to the agency and that they’re supposed to pay the collection agency, not their original lender. A solid piece of debt advice to hold on to in such a situation is that unless the agency clearly informs you that they’ve bought your debt, it’s likely that they’re working for your lender and you still owe the repayment to the original lender.

In such a situation, paying the agency depends on a number of factors.

If the agency now owns the debt, you should communicate and start a repayment plan if possible.

If the agency doesn’t own the debt and is harassing you or threatening to have you jailed, you can invoke some methods and legal procedures to get them to back off, at least temporarily.

If you’re having trouble with a debt collection agency, you can opt to contact an independent debt charity such as National Debtline or StepChange. They could offer you advice as to how to best approach the situation.

FAQs – Sell Your Debts in the UK

Can you legally sell a debts?
Yes. It is perfectly legal to sell debts to a third party if a lender thinks they won’t be receiving any payment in the near future. There is something they have to look out for, though. Once you stop paying money back to the lender, that is when they’re both allowed and likely to sell your debt to a third party.
Can debt be bought and sold?
Yes. A creditor can sell a debt to a a debt buyer who can collect the debt themselves or through a third party or they can even sell it on again as part of a debt portfolio.
How to know if my debt has been sold off?
Your original creditor should call you to let you know that they’ve sold your debt to a third party. Also, the third party will likely send you a letter, informing you that you now owe the debt to them instead of the original lender. From this point on, make sure to inform the debt purchaser of your financial situation and how you’re dealing with your money problems.
What are debt collectors allowed to do?
Debt collectors are allowed to work on behalf of the lender who employs their services and seek repayment from you. They need to make sure that they’re not threatening you with consequences outside their legal rights, such as threatening to have you jailed if you don’t repay. If they do so, you can invoke court action against them and have them back off.
Can debt collectors take me to court?
Yes. Debt collectors are allowed to take you to court on behalf of the lender if you’ve been avoiding debt payment or if they’ve remained unable to contact you over an extended period. This is subject to strict conditions though, such as the fact that before threatening you with court proceedings, collectors are required to send you a warning letter.
Can I dispute debts sold off to debt collectors?
Yes. Your right to dispute debts does not change once the third party buys the loan from your original lender. If you’re aware that you shouldn’t be paying your loan, such as in the event that it’s statute barred, you do have a legal right to dispute the debt.
Does your debt go away after 7 years?
Yes and no. If the debt can not been attempted to be recovered in 7 years it is statute barred and non-enforceable. It will drop off your credit report after 7 years too. If there has been attempts to recover the debt or you were take to court then no it never goes away.
Can I buy my own debt?
No. You cannot buy your own debt for a fraction of the debt like debt buyers do however you can often pay for it at a discounted price.

This guide covered the most essential topics you should know about when you’re facing a similar situation, and I hope it helped you tremendously.

If you need more debt advice, feel free to reach out.