Debt over 10 years old in the UK – Can You Be Chased? Laws 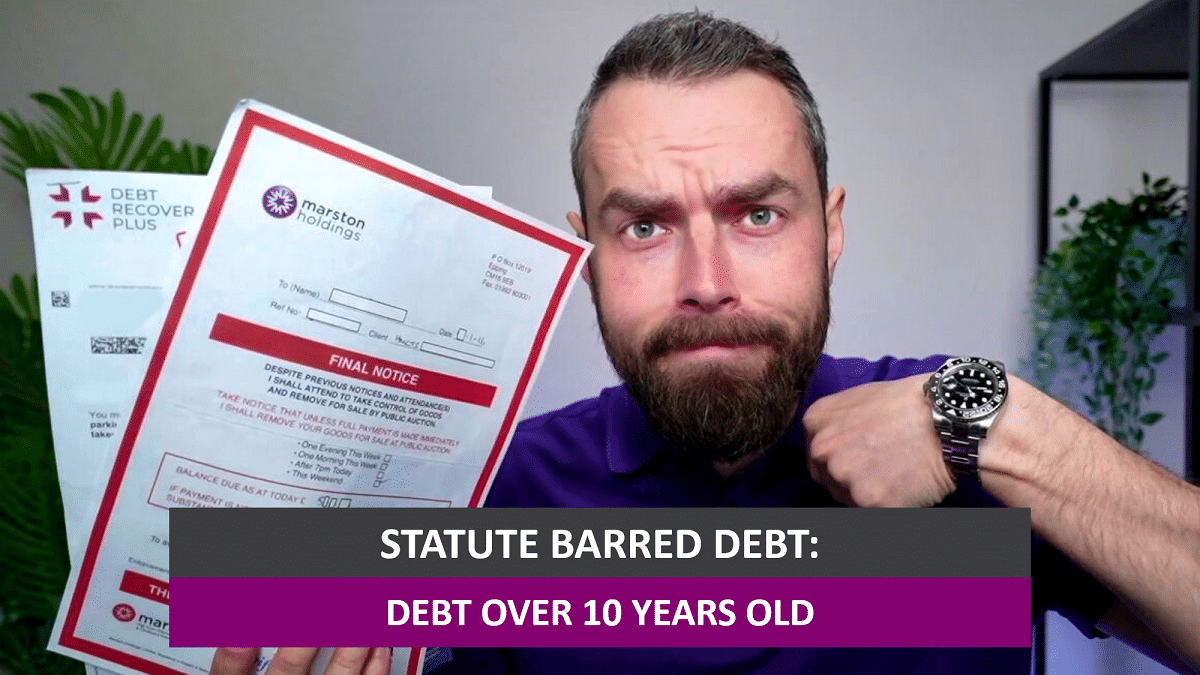 Debts and debt collectors get quite a lot of bad press nowadays. They often use quite forceful methods to get you to pay up, and while these can be a bit distressing, it can be argued that we all must pay our debts.

That being said, there will be moments when we let our debts slip from our minds –  and sometimes forget about them completely. You also might not even know you had a debt, as the creditor may not even contact you until sometime later.

We take a look at debt over 10 years old, and what to do if you’ve been contacted about this.

Paying your debts over 10 years old

While we all should pay the debts we make, there are some specific pieces of legislation in place that might mean we don’t have to pay. As you can imagine, there are all sorts of different rules and regulations surrounding debts and debt collectors, and it can be tricky to keep tabs on.

Most of the time, you’ll be required to repay the debt you owe, and the sooner you do this, the better. There are, however, a few different circumstances that might mean you don’t have to pay the debt at all. Debts that are over 10 years old come into play as well, so read on to find out what to do.

Debts you’re not responsible for

There are certain rules surrounding debts that might mean you do not have to pay up.

For instance, if there was a problem when you signed the agreement, like if you might have been pressured into signing it or the agreement itself wasn’t clear, you may not have to pay the debt if you can prove that this occurred.

Similarly, if the creditor didn’t check if you could afford the repayments when you signed the agreement, then you won’t have to pay. But what do you do if your debt is over 10 years old?

If a creditor takes too long to recover the debt you owe or doesn’t contact you in a set amount of time, the debt becomes what’s known as statute-barred. Normally, this is if your debt is over 6 years old. This means that it can no longer be recovered through court action.

Effectively, the debt is written off – however, technically it still exists. For a debt to become statute-barred, it takes a bit of time. So if you have a debt over 10 years old, it may well be statute-barred. There are, however, certain rules surrounding this too.

Can I be chased for debt after 10 years?

There are caveats to this. For example, if you owe debts to the DWP or HMRC they can actually deduct money directly from your wages, regardless of whether the debt is statute-barred or not. This is called a direct earnings attachment.

Here, we’ll go into some detailed responses to some of the more commonly asked questions about debts over 10 years old.

When does a debt become statute-barred?
6 years. When a creditor takes too long to either contact you with regards to repaying the debt, or take court action to get the debt repaid, the debt becomes ‘unenforceable’, or statute-barred. It still exists, but the law (the statute) is used to prevent (or bar) the original creditor from taking out a court order to get it repaid. They may be able to take other action, depending on the debt. If you have a debt over 10 years old, you should check to see if it is a debt that can be statute-barred. Even if your debt has been statute-barred, it could stay on your credit reference file, which will make it harder for you to get further credit.
How long does it take for a debt to expire?
For most types of debt in England, Wales and Northern Ireland, the time frame for a debt is six years. There are stringent laws set out which dictate the period in which the creditor has to begin court action. This time frame, or limitation period, varies according to the type of debt. The debts that this limitation period covers are most of the common debt types, such as utility debts, council tax debts, credit card debts and overdrafts, to name a few. These simple contract debts, as they are known, fall under this ‘Limitation Act’.
What has to happen for a debt to become statute-barred?
Once the limitation period is running, these contract debts will become statute-barred if: There are a few exceptions to this rule, so if your debt that is over 10 years old isn’t one of the debts listed, you may still have to pay up.
What kind of debts have an extended limitation period?
There are a few exceptions of debts that have an extended limitation period. Not all types of debt fall under the 6-year ruling, so it’s important to know what your debt is in regards of if you have a debt over 10 years old. The exceptions to the 6-year rule include:
What can a creditor do after the limitation period is over?
If a debt has become statute-barred, it can’t be restarted. The Financial Conduct Authority (FCA) in fact have declared that it is unfair for a creditor to continue to ask you to pay a statute-barred debt once you’ve told them you don’t intend to pay it. With debts regulated by the FCA, this means that once you have proved the limitation period has passed and confirmed you won’t be paying the debt, the creditor should stop contacting you. Legally though, they’re not obliged to stop contacting you, so if you have a debt over 10 years old, and have received a letter from the creditor, it is within their remit to do this. Some creditors, such as HMRC, can collect debts without needing to go to court, and even if the debt is statute-barred. So make sure you know who you owe the debt to.

At the end of the day, it depends on who you owe the debt to as to what to do next if you have a debt over 10 years old.

It can be a confusing thing to get a letter from a creditor about a debt you would have forgotten about, but if you are active and you gather all the right information, there’s a chance that you won’t have to pay them.